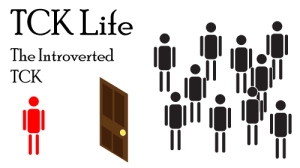 In many of the posts you have previously read, I have dropped into conversation how I am an introvert. I have made a conscious effort to blend that information into my experiences and give you a taste of what it’s like being both an introvert and a Third Culture Kid, but I can’t seem to shake the feeling that despite how I have described my upbringing and the value I believe it holds in creating the man I am today, many of you are probably reading the word introvert with an incorrect bias that has been crafted in your minds from the clay of countless years of misinformation blurring the true characteristics an introvert possess.

When most people hear the word introvert, their default reaction is to think of someone who is shy. Shyness has nothing to do with introversion. Being shy is a state of fear that’s tied to the way we perceive others judging our behaviour. It’s a completely separate and entirely mental state of being that does not in any way correlate to introversion. There are shy extroverts and there are shy introverts. The only thing is, a shy extrovert is much harder to pick out than a shy introvert, which is why the bias has stuck so well.

I have always said, in all aspects of life, that it’s the radical extremists that get all the attention. When I say I’m an atheist, people think of burning crosses, a hatred for those that believe in a supernatural creator, and a desire to end religion across the world. None of those characteristics describe my atheism, nor do they describe my personality. But that’s what people think, because those atheists are always the loudest, and whoever screams the loudest will always be heard above everyone else.

The problem with introverts is that we are never the loudest. In fact, the idea of standing in a room and yelling at the top of our lungs to grab the attention of the masses juxtaposes everything our natural state of being is about. So when you hear that introverts are shy, don’t like people, and hate leaving the house, these are simply the stigmas put upon us by the extroverts that fail to understand who we are and what fuels our strength.

So what is introversion? To make it as simple to understand as possible, the difference between an introvert and an extrovert is the source at which we draw our energy. Introverts draw their strength from quieter, more isolated environments or one-on-one social interactions while they are drained by loud, packed, highly stimulating environments. Extroverts on the other hand get their strength from high stimulation in the form of loud environments, chaotic moments in time, or social gatherings with many people while they get bored or tired at small social gatherings. That being said, this does not mean that extroverts can’t spend time relaxing at home, and introverts can’t spend a night on the town or at a large social gathering. It simply means that prolonged exposure to the type of event that’s opposite to our natural state of comfort will eventually leave us feeling tired, drained, and generally beaten. We will always need to retreat back to our area of comfort; for extroverts back to high levels of stimulation, and for introverts areas of low level stimulation.

But this isn’t a collection about introverts or extroverts. It’s a collection about Third Culture Kids, regardless of where they draw their energy. But then, it’s also a collection about me, one particular TCK who draws all his strength from writing, being alone, or having long talks with an extremely close friend or romantic partner. But one thing that all introverts very quickly learn as they develop in this world is that in today’s generation, there is very little room for us to be ourselves.

And that is even more of a fundamental truth for an introverted TCK.

The entire TCK process of uprooting, of starting again, of immersing yourself in other cultures forces a conflict within any introverted TCK. That being said, I’m sure it forces a conflict in an extroverted TCK too, but being the massively introverted person I am, it did some truly interesting things to my development into the man I am today. For starters, when I was young, the one thing I hated more than anything in the world was to be around large groups of people. I didn’t enjoy social gatherings like birthday parties, I didn’t like to play group games at school, I didn’t like sleep-overs at friend’s houses, and I hated to be away from my toys and my house and my family. I was comfortable in my own space with my own things around the people I knew well. I didn’t want to be around others, and when I was, I couldn’t do it for very long before my introverted need to be back in my comfort zone kicked in and called me back home.

But with every single move, with every single country I jumped to, with every single uprooting and complete overhaul of my life where I was forced into a new environment with new people and new places, none of which I knew or recognized, my introverted side that was incapable of letting go of what it knew was stripped naked, thrown into a room full of strangers, and told to dance.

One move at a time, I became more and more numb to it all. At first, I handled it with tears. Then, I handled it with aggression. When I moved to Hong Kong, I had already become quite the wordsmith. I could craft sentences with a vastly superior ability to that of my colleagues, and in doing so, I became a verbal bully. Sick of my introverted side ruining my life for the first year of every move, I changed the way I dressed, the way I presented myself, the way I interacted with others to mimic those elements of the “cool group,” or what we as TCKs could coin the “Cool Culture.” I became vindictive, vicious, and malicious with my words, picking apart people’s personalities, beliefs, attire, attitudes, and physical appearances. I was a monster, the person people would come to if they needed someone to be told the truth of a matter. And I hated myself for it. So, halfway through my stay in Hong Kong, I stopped.

When I got back to America, I had already accepted that I was an outsider. I knew that in this land of slightly-varying Christian Gods, I was never going to fit in. So, I pulled the polar opposite of an introvert and made acquaintances with everyone. I had no enemies, no one that I hated and no one that truly hated me. I introduced shaking hands instead of high-fives, answered curious questions with peaceful intentions about my atheism from the sea of Christians that surrounded me and never understood how or why I believed what I did, and I moved like an specter from social circle to social circle. I fit in everywhere, but while I did that, I had no single solid group of friends, no collection of people that would think to call me after school to participate in activities like sports or go see a movie. I just existed, an outsider capable of mixing with everyone.

All the while I was still an introvert. I hated to stand in front of a class of people, I hated to speak about the things I knew or show the knowledge of the world I had acquired. I was terrified of meeting new people, hated attending parties, hated flirting or dating or talking about the history of my life and how I had ended up where I was at the time. And yet, I did it all. I went to parties. I answered all the questions anyone could ask. I met new people. I talked in front of large groups. I mixed with everyone. I lived the life of an extrovert, and I did it perfectly while my body screamed in fear.

Even today, the adult I have become living the confused life of a TCK that has all grown up, I am scared to speak to anyone I do not know. If it were up to me, I would stay in my apartment all day. I would never go out. I would write in the comfort of my confined space with the company of my dog. I would not try to make friends, friends that I will inevitably say goodbye to. I would not push myself to come across as an extrovert in every aspect of my work.

Thanks to a lifetime of being dragged around the world, this TCK is in constant internal struggle with himself. On one end, there’s a child screaming in fear begging me not to go out and socialize, not to talk to the random person in the bar, not to go into the room with the loud music or the conference room full of people older and more experienced than myself, to never open my mouth and voice the knowledge I have acquired over the years. It’s begging me to just be quiet, to shut myself away, to recharge my batteries. But my introverted side always loses.

So while I may have been an introvert as a child, and my personality tests will say that I am still very much one today, my desire to fade into the background does not control me. I am a Third Culture Kid, and I am driven by change.

4 thoughts on “The Introverted TCK”