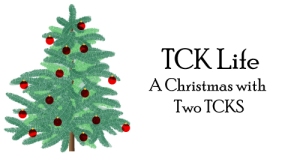 I have spent a good deal of time discussing issues that are relevant to the Third Culture as a whole with this collection, focusing heavily on presenting a semi-biased (all things are biased) but attempted neutrality when talking about culture as a whole. The topics have ranged drastically, and have covered matters that range from thought-provoking to lighthearted. When WordPress sent me my year-end report, my most popular articles included I Tell Them That I’m English, Hong Kong Kids, The TCK Life I Remember, and Expatriate Everywhere. These topics were all written very differently with very different goals. However, none of them were written conversationally, and none focused on an element I promised in this blog from Day One after I published The Illusive Home. This promise was that this collection would feature articles that stimulate the mind and make you think about culture, but that it would also show you the personal side of a Third Culture Kid living the life of an adult.

So, I figured with the holiday season almost at a close, what with 2013 looming ahead welcoming us to a New Year, it was time that I put up one final post for the year that did exactly that. Today, I want to embrace the spirit of the season, and just talk to you, my readers, about the experience I had this holiday season. As a TCK, this season is always interesting. There are endless battles throughout the year about who goes where, when we do what, who will join us, and why. This is just the way we do the holidays. My brother and I are TCKs. My parents are Expatriates. And while I live over a thousand miles away from my parents, my brother about 500 miles from them in the opposite direction, and all of us over 4000 miles from our family in England, we always pick one of our Homes, modern or historic, to go back to.

This year I went Home to Houston for Christmas. Of course, I had to leave Home in Raleigh to do it, and all the while I was thinking about the family back Home in England who I wouldn’t see and the friends in my Homes of Hong Kong and Paris and Australia and Singapore and anywhere else I have people I care about. But I had to pick somewhere, and my parents wanted me to come see them despite the desires of my brother and me to go to England and see the extended family. So Home I went, back to Houston, to see my brother, parents, and my maternal grandparents who had chosen to hop the pond this year and join us.

Christmas is always an interesting time of year when I am with my family in Houston, and even more interesting when I’m with my grandparents. To jump start it all, it was 80 degrees Fahrenheit on Christmas day, which is just wrong in my professional opinion as a seasoned meteorologist with a degree from the extremely prestigious University of Looking Up the Weather on Google. I am a Northern Hemisphere sort of person in the winter, and I strongly believe that the season demands cold weather. My parents, unfortunately, aren’t that way. They spent too much time in England in their youth and have an unnatural and inhuman fear of anything below 79 degrees.

On top of that, my poor mother lives in a home of three atheist male humans, a female canine that doubles as a piece of furniture when she’s not praying to the gods of Dog Food, and a male canine that believes all humans except my mother are out to condemn his soulless body to an absence of the afterlife upon contact. Then there’s Lynn. She is our key to all those religious things that partial Christians do, like Easter and Christmas and… well that’s really it, actually. She ropes us into these holidays full of fun, social, and generally sinful activities with the occasional sly nudge that sort of says “don’t forget, this is also Jesus’ birthday.”

Interestingly, I enjoy celebrating Buddha’s birthday more, but we can’t have it all our way. This is Lynn’s time of year, and so my brother and I play along like the beautiful little cultural melting pots we are. We help her decorate the tree (this year it was done via a Google+ Hangout) barking orders from the comfort of the sofa while she does all the work. Usually we’re excellent managers. We know exactly where all the ornaments should go and we’re nothing but critical if things aren’t done properly. I’m blaming the results of this year’s tree construction on the conversion from a three dimensional viewing space to a two-dimensional viewing space. It’s so hard to gather depth and perspective from a computer monitor. That’s why I maintain that this was not our fault: 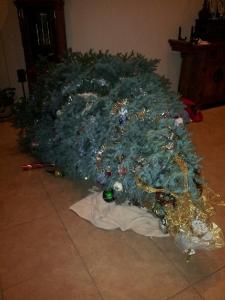 Again, not our fault!

I suggested that we just leave it that way to symbolize the new tradition of “Relaxed Christmas,” where even the Tree gets to kick back and not care about anything. Unfortunately, this was vetoed by our more traditional-Christmas mother who set it back up with the help of some friends and redecorated it. Fortunately, the second time around it wasn’t as front-heavy and it remained standing. This probably had a lot to do with the 50+ ornaments that were no longer on it due to their inescapable fate of shattering on the hard tiled floor during the Great Collapse of 2012.

After that, we did the normal Christmas things. Our mother, who has effectively given up cooking since both Robert and I departed, left us to fend for ourselves. We helped with Christmas dinner, and by helped I mean I flew a remote controlled helicopter around her head while she prepared the meal and my brother made sure to point out all the pieces of skin on the potatoes that my grandfather had missed while peeling them. It’s a team effort, really. We opened some gifts, drank a substantial amount of alcohol, and generally had a good time.

So what was it that made this event interesting for me as a Third Culture Kid? Well, for starters, my global cultural outlook has developed a pool of different cultural and religious celebrations from all corners of the world. My favourite being Chinese New Year, the Lunar Festival, Buddha’s Birthday, and any apocalypse parties that accompany whatever end-of-world prophecy happened that year. Christmas, unfortunately, never makes the cut as my favourite celebration.

In classic tradition, my brother and I make sure to point out at least once that Christmas isn’t fun, it’s just stressful, and more importantly it’s not a religious holiday anymore but a merchant holiday designed to make you spend too much money. This always upsets Lynn because she wants to believe it is still a Christian holiday, but I think us saying that we don’t enjoy it upsets her for the wrong reasons. It has nothing to do with the fact that it’s Jesus’ birthday. I don’t believe in any god, but I am perfectly fine celebrating the religious holidays of any culture because I love the lifestyle that accompanies it and the joy in the believers eyes. It is inspiring. But Christmas isn’t like that. Christmas is stressful, exhausting, expensive, and has lost all cultural meaning. The only reason more people don’t flip out about it is because they’re too busy hating Valentines Day. That and they’re being showered with gifts, I suppose.

And this misunderstanding always results in the development of other unnecessary debates. For example, my grandmother (Nan), grandfather  and me watched the Queen’s speech. She made a reference this year to the birth of a child so long ago that taught the values of life, a reference she hasn’t made in many, many years. However, she intentionally did not say to which child. Just a child. My grandparents were immediately glad she finally did that because Christmas is a Christian holiday, and I quickly pointed out the fact it wasn’t, resulting in them getting upset. But the truth of the matter is, the Queen didn’t really point out anything. English roots run deeper than Christianity into the Pagan faith, one that shares almost to the letter the same exact story of a boy born on the same day from a virgin mother with the same beliefs leading the same teachings but all for a different faith. And there are countless hundreds more. There are so many little boys born around Christmas in the world-wide history of countless faiths and cultures who did similar if not almost identical things.

And that’s where the TCK side comes into it all, and the misunderstanding looms. For me, it’s not about the god’s validity. It’s about how you accept others. And when you immediately shut down the idea that there are other interpretations of this holiday, and that yours isn’t the only one, then I am afraid my TCK side dies a little inside. Because that’s not what the holidays are about,  no matter what faith you’re jumping into or what time of year you’re celebrating. Holidays are for coming together, celebrating, and enjoying food, culture, family, and friends. It’s about unity, celebration, and another cycle.

And I don’t think there’s a TCK out there that doesn’t understand exactly that.